Get to know Djam Karet

Djam Karet was founded in 1984, and continue making new music even to this day, 33 years later! So far … they have released 18 full-length albums, including the newest release Sonic Celluloid (as well as an additional 24 minor releases and EPs and compilations, see the discography). The California-based instrumental group has often been called America’s greatest undiscovered band. Compared by the press with King Crimson, Pink Floyd, The Grateful Dead, Ozric Tentacles and Porcupine Tree, they are credited with breathing new life into progressive rock, leading the way to the genre’s future growth. Impressively, such high praise comes from widely divergent sources; Djam Karet has been written up in mainstream music publications such as BILLBOARD and ROLLING STONE, and in prestigious musician-oriented publications such as ELECTRONIC MUSICIAN, KEYBOARD, CD REVIEW, and GUITAR PLAYER, and also in numerous magazines, fanzines and webzines published for the indie/non-commercial rock communities. They have also scored numerous TV shows on ESPN, ABC-TV, and other networks, as well as many small film projects and commercials. RELIX Magazine recently noted that Djam Karet, “has always been the ultimate jam band…just a little ahead of its time.” EXPOSE’ asserted that Djam Karet was “…arguably the most important band of the last decade, and certainly the most unique” and placed the band “at the forefront of their instrumental genre”. Put simply by NEW AGE VOICE: “Djam Karet is no ordinary band. They gobble up myriad influences…including New Age, fusion, hard rock, electronic music, world, blues, even surf music…and metamorphose them into fascinating musical hybrids. They have never made the same album twice.” With the release of their newest release, Sonic Celluloid, Djam Karet makes their strongest statement yet and shows the world their uncompromising drive and vision.

Djam Karet was founded in 1984 by guitarists Gayle Ellett and Mike Henderson, bassist Henry J. Osborne, and drummer Chuck Oken, Jr. They chose as the band’s name an Indonesian word (pronounced ‘jam care-RAY) that translates loosely as “elastic time”. Early Djam Karet was a proto-“jam band” whose live, totally improvised performances on the southern California/LA area college circuit featured a free-form mixture of guitar-dominated instrumental rock and textural Eastern drone music, as on their 1985 release No Commercial Potential. Djam Karet’s mode of working and repertoire gradually expanded beyond improvisation to include compositional elements, field recordings, and studio work. In 1987 the band released The Ritual Continues, which was chosen “Number 2 Album Of The Year” by ELECTRONIC MUSICIAN magazine. Two years later, they released Reflections From The Firepool, which received ROLLING STONE’s accolade of ” Number 2 Independent Album Of The Year”. 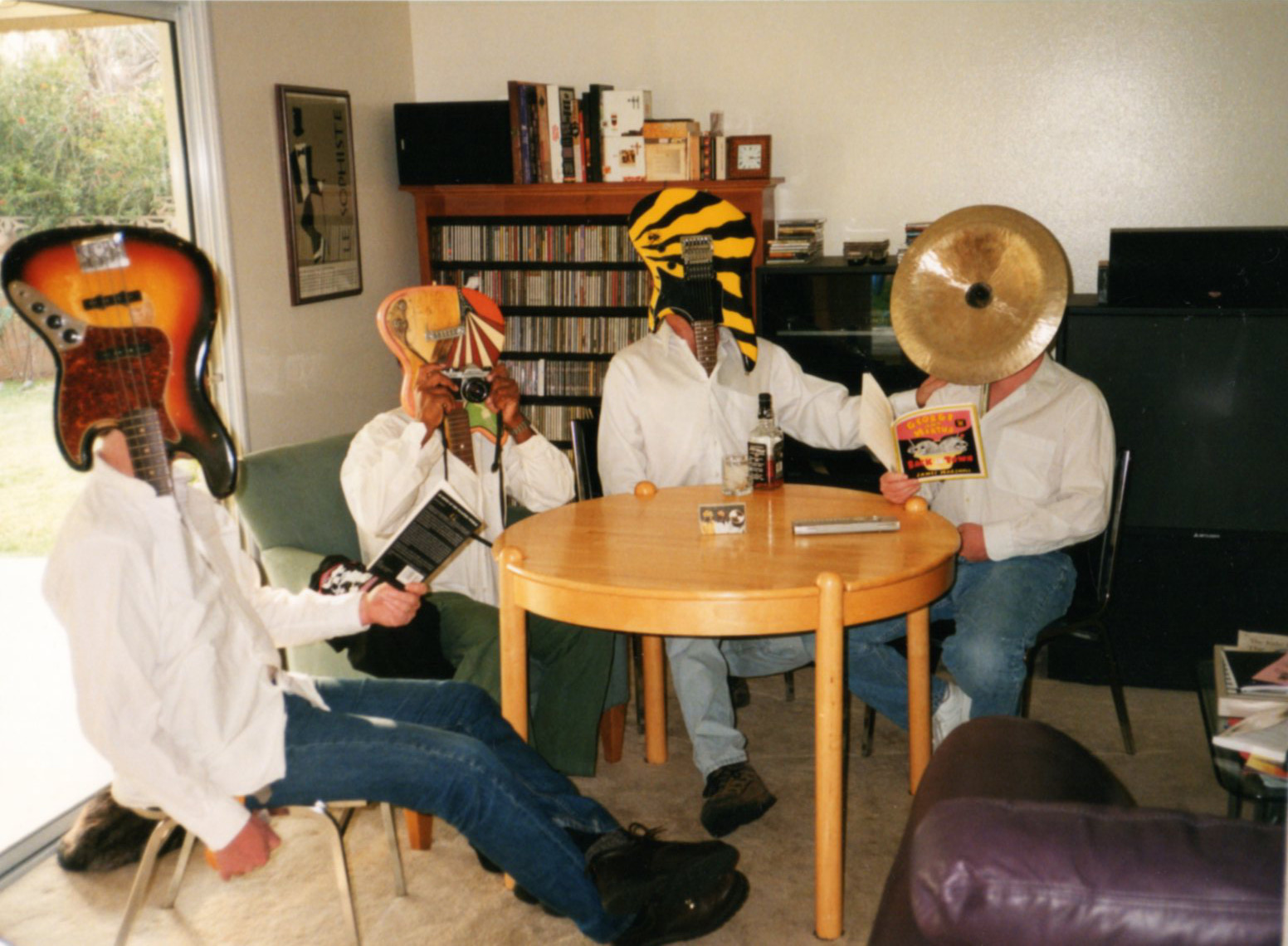 As the 20th Century drew to a close, Djam Karet signed with Cuneiform Records and entered a period of unprecedented creative productivity that only accelerated as the 21st century dawned. It began working on new releases for Cuneiform, initiated a program to repackage and reissue its back catalog on Cuneiform, and began playing live on the festival circuit. Live shows were performed at Day Zero for 1999’s ProgDay (San Francisco); at NEARfest 2001, progressive rock’s premier US showcase; ProgWest 2001 (Claremont) and at 2002’s ProgDay (North Carolina). Throughout the years they have also contributed music to 10 compilation releases, both here and in Europe. Many of those tunes are available nowhere else.

When Cuneiform released its first Djam Karet CD in 1997 titled The Devouring, INNERVIEWS noted that Djam Karet is “back with a vengeance, one hell of an album”. SPACE.com applauded their expanded sound featuring more keyboards: “As if the band’s earlier music hadn’t already scorched the ceilings of heaven, this new sonic incarnation burned like a stellar nova.” In 1998, Djam Karet performed on the West and East Coasts, recordings a live album for Cuneiform titled Live At Orion, released in 1999, that was applauded as “one of the best live recordings that I’ve heard” and was chosen as “Top 10 Album of 1999” by EXPOSE’ Magazine. The band began to do more work in the studio, resulting in the 2001 release of New Dark Age (Cuneiform) and also the Limited Edition CD release Ascension. Numerous critics called New Dark Age Djam Karet’s best to date. In the words of PROGRESSION: “This may be the best Djam Karet recording yet, which is a mouthful, considering that the band’s now-voluminous output is amply studded with gems. Their brilliant synthesis of abstract mind-trip and concrete butt-kick is at an all-time high here. Sonically, …it is simply masterful. This is one of the major releases of the year.”

Around the same time as New Dark Age’s release, and complementary to its work with Cuneiform, Djam Karet launched a series of self-released CD-Rs, reissues, and limited edition CDs for its fans. Within two years, the band had self-released numerous CD projects, including recordings made at New York City’s The Knitting Factory, an on-air performance recorded at KCRW-FM, and other archival performances. Out of this creative renaissance arose A Night For Baku. As a distillation of their musical visions across 20 years, A Night For Baku is indeed a diamond in Djam Karet’s oeuvre, a true Djam Karet “classic”, and featured the addition of new band member Aaron Kenyon on bass. The title derives from Japanese folklore: the Baku are mythical inhabitants of the dream world, valiant warriors who devour nightmares as the spoils of battle. The CD features Djam Karet using more keyboards and electronics and collaborating on one track with Electronic musician Steve Roach, who worked previously with the band on Collaborator.

It is this new line up as a quintet that created Recollection Harvest, one of their best and most melodic albums. Actually two albums on one CD, Recollection Harvest is divided into two chapters. The first-half is filled with their most melodic and jazzy music released so far, with a strong focus on composition and tight arrangements, Mellotrons, and soulful guitar melodies. The second-half, titled Indian Summer, features a collection of compositions colored with beautiful acoustic guitars and analog synths and showcases their more atmospheric side.

In 2009 the band was flown to the Bordeaux area of France to headline the annual Crescendo Festival. Held in a huge grassy field right on the beach, this three-day progressive rock concert took place with great weather and fantastic music by all involved. With free camping and a bohemian atmosphere, this was one of the group’s most enjoyable gigs. To achieve a fuller and more massive live sound, the group acquired new member Mike Murray on guitar, allowing Gayle Ellett to focus more exclusively on keyboards. When they returned to the States they decided to record The Heavy Soul Sessions in 2010, to better document their current live sound. In order to achieve a more lively and dynamic sound, all of the music was performed live-in-studio without any overdubs and no compressors or limiters were used during the recording process. This gives the CD a sound that is very dynamic, punchy and powerful, where the drums and bass are crystal clear and aggressive, and the guitars and keyboards are warm and inviting, and clearly demonstrates the broad and varied world that is Djam Karet.

In 2011, they formed a record label called Firepool Records s in order to showcase some of the side projects of the band members (Hillmen, Henderson/Oken) and to also bring a spotlight to other their USA all instrumental progressive bands (Herd of Instinct, Spoke Of Shadows). They have released 6 CDs to date!

In 2013, they released The Trip which was their first studio album of all-new music in eight years! It features one single 47-minute long track, a psychedelic journey through your mind’s eye, the soundtrack of a trip to places both familiar and otherworldly. This album was widely heralded and was chosen as “#6 Album Of The Year” by the listeners of Gagliarchives FM-Radio Show.

In 2014 the group began celebrating their 30th anniversary together!! To mark this epic moment in time, the group has released their 17th album, titled Regenerator 3017. Filled with all-new music, memorable melodies, wailing guitar solos, fusiony grooves, Minimoogs and mellotrons, and more, it showcases a band at their fiery best!

In 2017 they released their most melodic album, Sonic Celluloid. Relating to the idea of “sound as cinema”, this collection of 10 tracks demonstrates the group’s ability to create “mini-movies in your mind”. With more acoustic instruments, and more Minimoogs and mellotrons then on any previous album, Sonic Celluloid is their best produced and best sounding album to date.

Throughout the year 2017, we will see the band re-releasing re-mastered versions of older albums, as they begin work on yet another album! Stay tuned for updates.

For more info and the band’s label and online shop
http://www.djamkaret.com

Your support means so much, thank you.